Take Our Daughters and Sons to Work Day 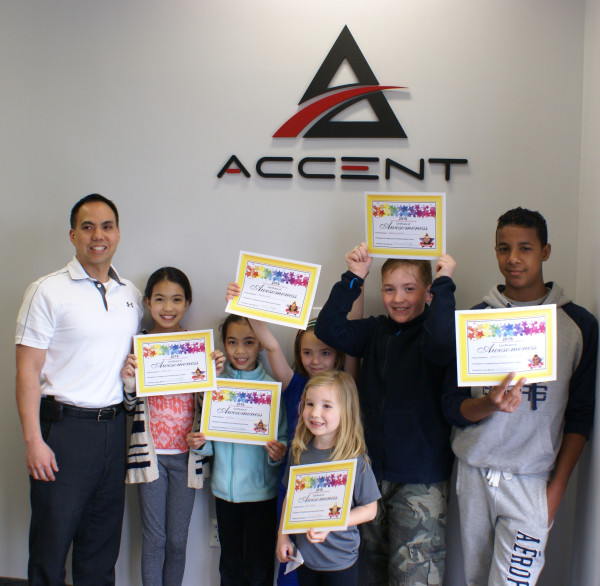 Yesterday we celebrated our second “Take Our Daughters and Sons to Work Day” at our Accent Printing office. Four of our employees brought their children in, for a total of six kids aging from six to 13.

Last year we planned the event in about three or four days. We brought the kids through the different departments and showed how a project is created from start to finish.  This year we spent at least two weeks preparing various printing projects they could once again learn from and have fun with! Below are photos showing the different projects they worked on:

Danuta’s desk – Danuta and Grace. Danuta helped the children design their own bookmarks and name tags. They then watched them  be printed and laminated.

Erik Krawiec, our Operations Director, looks forward to this day every year since he’s still a kid at heart 🙂  The children loved his PhotoShop project he designed, directed, photographed and printed for them. He showed them how to use the special effects features in PhotoShop:

PhotoShopped image of Wester Jr. shown “working” in his dad’s part of the shop.

Erik and the kids in his office. When Mike asked them later what their favorite part of the day was, they all said, “Erik!”

While some of the kids were busy at Erik and Danuta’s computers, others worked on a Star Wars project Danuta had our digital print operator, Steven Longo, print for them. They cut and assembled mini paper “robots.”

Robert and Grace, in his office, assembling her Star Wars figure. At one point Robert had almost all the kids helping him cut and assemble the characters – Robert’s own production line!

And me? – Account Executive Karen Rubinstein? I ordered the pizza’s, set the table, created their certificates and took these photos. Like I said, it was a group effort!

And after all the projects were done and the last slice of pizza eaten, the kids reminded us they are kids by playing in costumes Robert, Erik and Danuta helped them make.

Grace shown in costume. As they ran up and down the halls, her dad said, “Someone send help! The kids have taken over!”

We all can’t wait for next year! And we’ve started planning already…