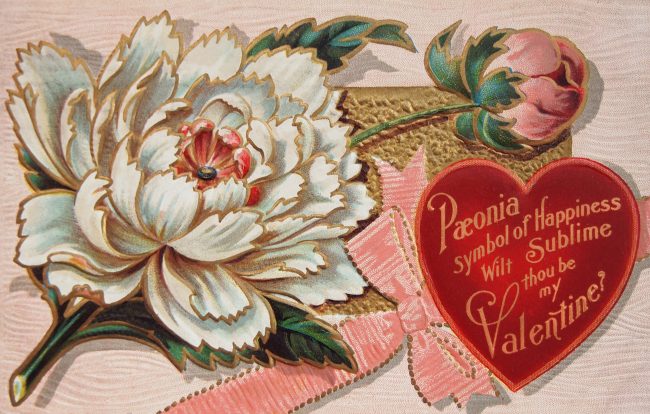 Valentine’s Day greetings began in France in the 1400’s when February 14th was designated as the feast day of romantic love. The earliest surviving card was from frenchman Charles the Duke of Orleans. Imprisoned in the Tower of London in 1415 he wrote the following to his wife:
“Je suis desja d’amour tanné Ma tres doulce Valentinée.” Which translates to: “I am already sick of love, my very gentle Valentine”.
The next oldest surviving Valentine letter in English is from 1477 from Margery Brew to her fiance John Paston. John is described as her “well-beloved Valentine.”

By the 1600’s Shakespeare wrote of Valentine’s Day in his play Hamlet. Ophelia says,
“To-morrow is Saint Valentine’s day, all in the morning betime, and I a maid at your window, to be your Valentine.”
But it wasn’t until the early 1700’s that traditional Valentine cards were sent. Lovers handmade the cards, decorating paper with flowers, love knots and poetry. The cards were slipped under their door or left on the door-knocker.
Pre-printed cards began in Great Britain. The oldest surviving example is from 1797 and on exhibit at York Castle Museum. It’s decorated with Cupid and flowers and the verse around the borders read:
Since on this ever Happy day,   All Nature’s full of Love and Play  Yet harmless still if my design,  ‘Tis but to be your Valentine.

Once the Industrial Revolution came to Europe in the early 1800’s it became easier to mass produce these cards and became popular. By the 1820’s about 200,000 Valentine cards were being circulated in London! With the establishment of the UK’s postal service in the 1840’s – and postage costing just a penny – the mailings more than doubled. They continued doubling within the next two decades.
By the mid 1800’s Valentine’s cards began being exchanged Today there are about 25 million Valentine’s Day cards exchanged in the UK and around a billion Valentine’s Day cards exchanged in the United States! Print still beats emails when it comes to expressing love.
Share
Tweet
Pin
0 Shares
Previously: Happy New Year! – From the Accent Printing Team
Next up: Importance of Your Company’s Culture